A debate that focuses exclusively on whether not the legal profession is, or should be, self-regulating is a false and ultimately futile debate. Instead, the real (and constructive) debate is: how do we create a regulatory environment that embraces the OECD’s elements of good governance, in order improve regulation of the legal profession as well as of legal services as a whole?

The table below (Table 25.1) brings together the assessment for each country: 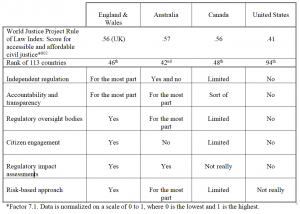 The table above reflects four different regulatory environments: one that has fully embraced these six elements of good governance, one that has accepted them in large part, one that is cautiously experimenting with them, and one that rejects them entirely. The consequences of these differences are clear to see:

While England & Wales is by no means perfect, it has a robust and productive—even prolific—regulatory environment. The legal professions have a voice in how legal services are regulated, but their voices do not control, nor does any one of the large variety of other voices that are also heard. Debate about how legal services should be regulated is constant, open and (usually) frank. Multiple actors conduct empirical research and publish it in open access. Regulatory decisions are made only after conducting that research and taking into account the perspectives of most if not all stakeholders (most notably citizens/the public).

In Australia, the variety of authorities and actors that play roles is not as large. Most notably, citizen engagement is practically nonexistent and the legal profession still plays an overly-dominant role in regulation: these factors likely explain why the LPUL failed to extend the regulatory framework for ILPs to all legal service providers. Nevertheless, the other elements of good governance are more or less closely embraced, with the result of a regulatory environment that is also robust and productive, and where regulatory decisions are also made, for the most part, only after conducting empirical research.

Canada has been described as the “last bastion of unfettered self-regulation” in the common law world. Nevertheless, Canada has implemented the six elements in limited ways, and it appears to be moving, however cautiously, towards broader implementation. In certain provinces professional regulators serving on staff of the law societies (rather than the “benchers” who are elected from among practicing members of the profession) appear to be the driving force behind a movement towards a risk-based approach. While the words “robust” and “productive” may not be the most accurate to describe Canada’s regulatory environment, increased openness and exploration are.

This analysis raises the question: why are there such differences among these four countries? While no doubt there is more than one response to that question, an important if not crucial one is this: the more actively the country’s legislative and executive branches participate in the regulation of legal services, the more modern—the better— the regulatory environment. In England & Wales it was the executive that instigated the countries’ metamorphosis and the legislature that brought it to fruition, over the objections of some (but by no means all) of the members of the countries’ legal professions. In Australia, it was primarily the legislature, and especially the Parliament of New South Wales, that brought ILPs into being, with minimal input from the legal profession. It is not a coincidence that later when the legal profession was given greater power in the decision making process, and notably when the National Legal Profession Reform Taskforce (made up principally of representatives of the executive) and the state legislatures deferred to the Consultative Group (made up principally of members of the legal profession) that the regulatory environment in New South Wales and Victoria took a step backwards. In Canada, the legislature and the executive play minor roles as compared to the outsized role of the profession in its own regulation: this no doubt explains on the one hand why Canada’s progress is relatively slow and incremental, but also, on the other hand, why it is able to make any progress at all.

In very stark contrast, in the US, on the federal as well as state level, the executive and legislative branches play virtually no role in the regulation of legal services. Further, as discussed in chapter 2 and again in chapter 21, while the judicial branch of each state holds de jure power to regulate the legal profession, it has for the most part abdicated in the exercise of this power, leaving a vacuum for the profession, and notably for the ABA, to fill. For so long as the three branches of government: executive, legislative and judicial all fail to assert regulatory power over the legal profession and, by extension, over legal services, it will be virtually impossible for the country’s regulatory environment to improve.

This analysis also demonstrates that in the US, a debate that focuses exclusively on whether not the legal profession is, or should be, self-regulating is a false and ultimately futile debate. Instead, the real (and constructive) debate is: how do we create a regulatory environment that embraces the OECD’s elements of good governance, in order improve regulation of the legal profession as well as of legal services as a whole? What are the changes that we need to make in order to breathe life into—to modernize—our regulatory environment—to make it as robust and productive as that of England & Wales?

This chapter is an excerpt from Modernizing Legal Services in Common Law Countries: Will the US Be Left Behind? To learn more about the book, please click here.