France’s Haeri Report on the Future of the Legal Profession: Intro 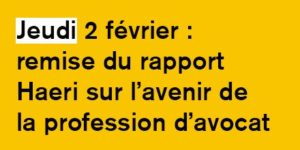 This is the fourth in a series of eight posts about France’s move towards alternative structures. This post and the following two will focus in particular on the Haeri Report. This post provides general background information about the Report and points out some of its more interesting elements; the immediately following two posts will examine the Report in detail under the specific optic of alternative structures. Links to the other seven in the series are provided below.

In his October 20, 2016 letter asking Haeri to prepare the report, Urvoas explained that significant reforms to France’s training program for new lawyers were about to be implemented. For Urvoas, it did not make sense for this to happen without, at the same time, developing a clear vision of just what the future will be for those new lawyers.

Further, Urvoas observed, the legal profession as a whole is plagued by doubts about its future – doubts new lawyers share.

In light of these questions, Urvoas asked Haeri to constitute a commission whose mission will be to “make a precise diagnosis and propose means to resolve them.”

Urvoas continued by describing the make-up of the commission: it should be lawyers (avocats) who are knowledgeable in the matters addressed. Further, they should be representative of the diversity of the profession, taking into account areas of practice, types of structures, and geographic locations. Finally, the team should have gender parity.

Giving a bit more guidance, Urvoas emphasized that the focus of the commission’s mission should be on new lawyers. That is, the commission should ascertain the conditions for entering the profession, the expectations of new lawyers, and the reality of their experiences. More largely, Urvoas directed the commission to examine the realities of the legal profession today and its perspectives: what services are expected of the profession, how persons in need of legal services obtain them (notably from lawyers), and what are the foreseeable impacts of new technologies.

Further, Urvoas directed the commission to develop proposals for how to improve the career paths of young lawyers, how to facilitate adaption to new technologies, and how to favor relations with members of other professions, on both a national and international scale.

Urvoas instructed Haeri and the commission to conduct its work “as quickly as possible” and to submit a report by the end of the year – so in just over two months! (This short deadline is even more remarkable when compared to David Clementi’s 18 months and the 2-year mandates of each of the American Bar Association’s Commission on the Future of Legal Services and the Canadian Bar Association’s Legal Futures Initiative).

Not at all surprisingly, Haeri did not meet that deadline – he instead submitted the Report on February 2, 2017. Still an exceptionally short length of time given the enormity of the mission.

As the first pages of the Report explain, Haeri composed a commission of four lawyers, including himself, seeking the most parity possible: men/women, Paris/province, sole practitioner/law firm, litigation/transactional.

There is some inconsistency regarding the number of persons with whom the commission consulted. For example, the first pages of the Report state that the team consulted with “more than 130 persons,” but Annex 1 to the report lists 124.

The overwhelming majority of those 124 persons were lawyers (active members of the bar). The others – taken together, still a minority of the 124 – were principally in-house counsel (in France in-house counsel are not permitted to be active members of the bar), law school and professional bar school faculty and administrators, judges, or representatives of “legaltech” companies. Interestingly, in spite of Urvoas’s specific focus on law students and his specific direction that the commission consult with “representatives of law students” (in plural), only one person out of the 124 listed in Annex 1 is easily identifiable as a law student.

Having made such observations, the Report makes 50 specific recommendations, including:

Here are just three of the many additional interesting and notable elements of the Report:

The most common educational route to bar admittance in France takes place in three stages. The first is four or five years of university study of law. The second is a period of preparation for the entrance exam to a professional bar school (CRFPA or Ecole d’Avocats). This entrance exam, which tests substantive legal topics, is quite difficult. After university, most students take at least one year if not more to prepare for it, notably by enrolling in special preparatory classes. The relatively small percentage that pass the exam (in several regions the passage rate is less than 25% and in just one region is it greater than 49%) are then allowed to enter a CRFPA and complete the third stage, a program that takes place over a period of 18 months.

In accordance with Urvoas’s instructions to focus on new lawyers, the Report contains many recommendations relating to CRFPAs. For those outside France, perhaps the most intriguing of these recommendations is that CRFPAs should dispense with teaching substantive law because it unnecessarily duplicates the students’ university education. Instead, the Report recommends that the entire curriculum of the CRFPAs should be reconstructed around the top ten skills that the World Economic Forum has said will be the most needed and useful in 2020. Those skills are:

This is a highly intriguing recommendation. It brings to mind a program offered by Penn State University’s Dickinson Law on the topics of “cultural” and “extra-legal” competencies.

The office cannot be just any office. Instead, it must be “conforme aux usages,” which can be translated as “customary” or “consistent with common practice.”  Further, it must allow for the practice of law “in respect of the core values of the profession,” and allow for the protection of confidentiality. French bar authorities reserve the right to inspect a lawyer’s office in order to verify that it conforms to Article 15.1. (There was a time when such inspections occurred systematically, notably when a lawyer opened a new office).

Most if not all bars in France have interpreted Article 15.1 as excluding home offices. That is, while bar authorities cannot prohibit a lawyer from working from home, the authorities can, nevertheless, require the lawyer to maintain separate office space “consistent with common practices,” even if the lawyer never uses that space, or needs it for any other purpose (that is, other than for bar registration). Indeed, an industry has grown around this requirement, with several companies offering domiciliation services specially designed to enable lawyers, and particularly new ones unable to afford a “real” office, to meet this requirement to have the “right” address.

What is puzzling is why the Report does not go further. Why doesn’t the Report recommend that the rule requiring lawyers to maintain office space that is “consistent with common practice” be abolished as long as a lawyer can demonstrate that he/she works in a manner that protects confidential information? And if the commission did not want to go quite so far as to make such a recommendation, then why didn’t it at least question the necessity of the rule?

The failure to make this recommendation is all the more puzzling when you consider some of the arguably more radical recommendations that the Report makes with respect to legal education: The Report states that not only teaching methods but also teaching spaces must be re-thought. More specifically, the Report recommends the elimination in CRFPAs of large amphitheater classes, in favor of small groups (maximum 35 persons) who meet in a variety of places, such as in law firms, companies, regulators, and courts.

If the spaces for legal education can be “re-thought” in this manner, then why can’t the spaces for legal work, as long as clients and their information are sufficiently protected? Further, what is there about having office space “consistent with common practices” that offers a greater guarantee of protection of confidential information over a home office? In sum, who is Article 15.1 really protecting? Clients? Or established lawyers and law firms who have easy access to the resources needed to maintain offices “consistent with common practices,” to the detriment of those who do not?

Finally, this requirement appears quite strange, even difficult to believe, when explained to lawyers outside France. For example, no such requirement applies to US lawyers – they are not required to live in, practice in or have an office in the state(s) where they are admitted. Further, there are no restrictions on lawyers working from a home office, or even any requirement that a lawyer have an office at all. There is no evidence that this harms the legal profession in any manner. There is no evidence that this harms clients either, and notably there is no evidence that their confidential information is jeopardized. To the contrary, it can be argued that it greatly benefits clients who work with lawyers who are able to keep this element of their overhead expenses very low.

One – just one – paragraph of the Report raises the question of limited scope representation (also called in English “modular services” or “unbundling”). The Report observes that some clients, with limited resources, ask their lawyer to limit the time spent on a matter. Reasonable as such a request may appear to be, it can be a difficult one for a lawyer to comply with. This is for several reasons, the Report explains: to begin, the sense of perfectionism and “honor” that lawyers are taught to bring to their work. Even more important is the question of professional liability, which requires a lawyer to pay scrupulous attention to all aspects of a matter, and to identify all risks and potential issues, regardless of whether the client just wanted one small thing. The Report asks: would it be possible to vary a lawyer’s professional responsibilities so that it depends upon the extent of the work the client actually requested? “Perhaps this is a path that deserves to be explored.”

In sum, the Report discusses limited scope representation as if it were something entirely novel. It doesn’t seem to even have a name in French. It’s not clear to what extent the authors of the Report were aware of the growing use of limited scope representation outside France. For example, this study was commissioned to understand its (widespread) usage in England & Wales, and the American Bar Association encourages its use under the right conditions. It’s even possible to take a course about it.

The next two posts will examine the Report under the specific optic of alternative structures.

Links to the other seven posts in this series:

All eight posts, regrouped, can be viewed at this link: Regroup of posts on France