Legal Aid: What Am I Missing?

I am clearly missing something. I just don’t get what it is.

Yesterday (February 20) Linda Klein, the President of the American Bar Association, posted this on the ABA website: 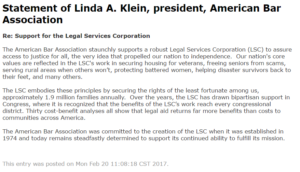 She didn’t mention it, but it’s likely she posted this in reaction to the recent news that the Legal Services Cooperation is included on a list of federal programs targeted for elimination, ostensibly as a budget-saving measure.

Just in the past week, on Twitter Klein also posted this: 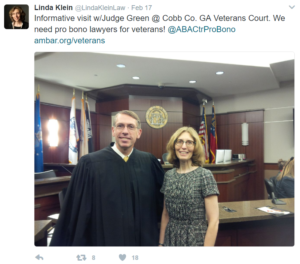 And Klein is by no means the first person (or the last) of the ABA to argue in favor of more pro bono and, in particular, of more financial resources for the Legal Services Corporation and other legal aid organizations.

Just have a look at this page on the ABA website: It states that:

Financial resource limitations remain one of the largest barriers preventing civil legal aid providers, even with their pro bono allies, from addressing the needs of low-income communities.

The page contains a wealth of information, resources and advice for persons interested in seeking more money to fund legal aid. It’s clear that a great many people spent a lot of time and energy on it.

Again, it’s all great. Who can argue with it?

Let’s look again at the justification Klein gives for the ABA’s support of a “robust” Legal Services Corporation. She says that the LSC is needed “to assure justice for all:”

Our nation’s core values are reflected in the LSC’s work in securing housing for veterans, freeing seniors from scams, serving rural areas when others won’t, protecting battered women, helping disaster survivors back to their feet, and many others.

Again, it’s impossible to argue with this. All these people, and more, need legal help. In many cases, they need it desperately. Yet, even with the money currently going to the Legal Services Corporation and other legal aid providers, it isn’t enough. Of those who seek legal aid, at least 50% are turned away for lack of resources. The shortage of civil legal services in the United States, for the poor as well as for the middle class, is so great is has been described devastating, as well as a human rights crisis. In sum, as important as the Legal Services Corporation is, it does not “assure equal access to justice for all.” It would need a lot more money for that to be the case.

It is part of our nation’s core values to reject ways of providing legal aid that do not rely upon public funds or on pro bono work?

Apparently it is because it is what we are doing.

Both the current day as well as history provide us with examples of how free legal assistance can be provided without reliance on public funds.

The past also provides us with examples of how legal services can be provided to the poor without reliance on public funds. Those examples can be found in Felice Batlan’s book Women and Justice for the Poor: A History of Legal Aid, 1863-1945. This fascinating book details how, over a period of decades in the late 19th and early 20th centuries, a number of women’s social services organizations in the United States provided free legal services to the poor. They did this sometimes with the assistance of professional lawyers, but, in most cases, with “lay” lawyers — that is, with women who did not have a formal legal education and were not admitted to the bar but who did have extensive legal knowledge and experience. In either case, the services were provided free of charge (as well, in many cases, in combination with other, nonlegal services, such as help to find employment, housing or clothing) yet also without any allocation of public funding.

Today women’s social services organizations no longer play the role in society that they once did. That does not mean, however, that the types of legal issues that they dealt with or the types of causes that they championed have disappeared. To the contrary, they are still very much alive and championed in a large variety of community organizations and advocacy groups that seek to help poor and disadvantaged persons with respect to housing, labor conditions, domestic violence,… While these organizations of course provide information to their members and constituents, to the extent that information is legal in nature, and certainly to the extent it is tailored for any specific individual or case, the organizations enter a gray area where their activities could be characterized as the unauthorized practice of law. In this manner they must limit the legal services they provide in order to not run afoul of unauthorized practice of law rules.

Just this: the regulations that restrict nonlawyer ownership and control of law firms combined with rules on the unauthorized practice of law.

Again, Salvos is not a secret. It is well-known in the US among those who are interested in the topics of alternative structures and the regulation of legal services. However, those same people, as far as I can tell, reject the Salvos model for the United States. Perhaps the best example of this is a Twitter conversation I had just a few days ago. When I argued that regulations need to be changed in order to allow for a greater number and variety of legal services providers to enter the market, my correspondent challenged me, stating “so far no one has found something I can’t do today that regulatory change would allow me to do.” When I responded that the Salvos model (among several others) would be impossible in the US, he retorted that Salvos could be replicated in the US with a law firm that donates its profits to legal aid. And he went one step further, saying “We already can do better.”

If my Twitter correspondent is right – if both the Salvos model can be so easily replicated with “a law firm that donates its profits to legal aid,” and if “we can already do better,” then why does the ABA (and others) spend so much time and energy seeking funding for legal aid? Instead, shouldn’t they be focusing their time and energy on creating “law firms that donate their profits to legal aid,” and shouldn’t they be doing that already “better” thing my Twitter correspondent mentioned? Couldn’t we, in that way, end our reliance upon public funding for legal aid?

In sum, there is something I really struggle to understand. If we don’t need to change our regulations to allow for a US version of Salvos Legal because we can already create structures that serve the same purpose (provide free legal services to the poor) – in fact, if we can already, as my Twitter correspondent said, even “do better” – then why do we need public funding for legal services at all? Why aren’t we, instead, out there creating all those law firms that will donate their profits to legal aid? If our regulations are so great and don’t need to be changed, then why isn’t that enough?

What am I missing?