The last post described recent (and still evolving) research by NYU PhD candidate Hannah Simpson. Her empirical research focuses on how the fees that a state (that is, a country’s national and/or local government) charges to access its legal systems (courts as well as other agencies such as those for property registration and licensure – which collectively Simpson refers to as a state’s “property rights institutions”) interact with other institutional and economic conditions, and what the effect of that interaction is upon access to justice in that state. In a nutshell, her models demonstrate that the effect upon access to justice is as follows: in wealthy countries economic growth increases demand for access to the state’s legal system but decreases supply. This is because wealth and economic development in a wealthy country are liable to motivate the state to increase fees, on the grounds that the wealthy can and will pay them. However, those same fee increases are usually substantial enough to dissuade the poor from using the state’s system and thus there is an overall decrease in access to justice. In contrast, in poor countries, economic growth increases not only demand for access to the state’s legal system but also supply. This is particularly the case when the state’s system is institutionally biased in favor of the wealthy, even though, Simpson observes, such a conclusion appears counterintuitive. This is because economic growth motivates elites to buy into an otherwise fragile and unappealing institutional framework. This participation increases the system’s effectiveness and thus its appeal, and also leads to reduced administrative costs, enabling the state to reduce its fees, thus increasing accessibility.

Simpson’s research goes further, to also seek to understand: when a state uses its “property rights institutions” to generate revenue, what effect does it have upon competition from private legal services providers? Her conclusion in this regard is in two parts:

When a wealthy group exits a state system, the state system also becomes less effective, because of the reduction in the number of participants. On the other hand, the additional consequences for the remaining population are equivocal—indeed, they are paradoxal. In theory, the remaining population should benefit from lower fees, but only under certain conditions, namely that the country is experiencing low economic growth and income inequality is increasing, because under these conditions the state will likely lower its fees in response to the exit of the wealthy group. However, Simpson explains, those are not the conditions under which wealthy groups are motivated to exit a state system. Instead, they are motivated to leave when economic growth is high and income inequality is decreasing, because those are the conditions under which a wealthy group is more likely to benefit from participation in a private system rather than a public one. Further, under those conditions, wealthy groups are willing to pay a higher premium to access a private system. In sum, it appears that if a wealthy group does choose to opt out of a state system in favor of a private one, it is more likely than not to do so under conditions that will result in negative effects for the remaining population.

Simpson’s research is complex. It requires significant intellectual investment. But those facts do not make her research less compelling, or less deserving of attention. Again, you can read about her research in more detail here.

What are the implications of Simpson’s research? I suspect there are many—in this post I’d like to consider two of them. 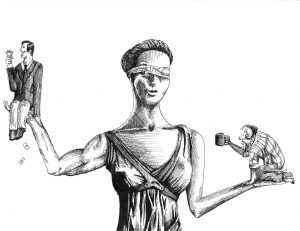 Implication N° 1: We Can Predict the Consequences of Privatization

Let’s start with Gillian Hadfield’s 2016 book Rules for a Flat World: Why Humans Invented Law and How to Reinvent It for a Complex Global Economy. In this book, Hadfield deplores the “abysmal” state of “our knowledge about legal infrastructure.” She continues: “there is next to no research on the fundamental questions of how most effectively to provide legal infrastructure in different environments.” She deplores that “legal infrastructure is simply not on the research agenda in our universities.” She bemoans that “research on how to build legal infrastructure in the face of mounting costs, with the dramatic upheavals of the complex global economy, or in places where legal order is absent or broken” is barely on the radar. Hadfield further laments the lack of research in this post.

Of course Simpson’s research does not respond in full to Hadfield’s lamentations, but it is a beginning of a response, and a highly significant one. It exposes the consequences for access to justice of an important element of legal infrastructure—the use of legal institutions to generate revenue—an element that Simpson persuasively argues has not received sufficient attention to date.

More than that, Simpson’s research speaks directly to the principal argumentation of Rules for a Flat World: that regulation should be privatized. More specifically, the book argues that “markets” (private enterprise) should be allowed to compete with state (public) agencies as well as with each other for the provision of regulatory services. An important element of Hadfield’s proposal is that private regulators would be allowed to charge fees to generate not just revenue, but profit (“dangling the prospect of profit”).

Simpson’s research indicates that if the proposal of Rules for a Flat World were to be implemented, certain groups would likely benefit, while certain others would likely suffer. The beneficiaries would be what Simpson terms “wealthy groups,” that is, it would be the “companies” and “businesses” (that is who Hadfield depicts as the customers of private regulators) who can afford the fees of a private regulator. Those who would not benefit would essentially be everyone else (individuals, businesses and other organizations unable to afford the private fees). They would, Simpson’s research demonstrates, be left with a state legal system that is necessarily less effective (because of reduced usage) but no less expensive (because it would be unlikely that the state would be motivated to lower its fees in response to the exit of the wealthy groups). The remaining users would have the right, like the wealthy groups, to also exit the state system for a private one, but Simpson’s research suggests that such a right would be little more than theoretical. If they were to exit the state system, the remaining users would end up in private systems inferior to the state’s, because they would not be able to pay the fees required to establish and maintain a system approaching the state’s. So, instead of having recourse to (expensive) procedural safeguards to protect their rights, they’d have little more than (cheap) peer pressure, if not violence. 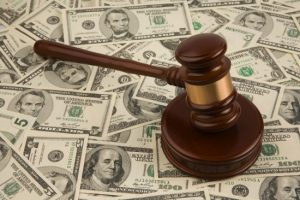 Implication N° 2: A Stark Reality and a Stark Choice

Recall Simpson’s finding that in wealthy countries economic growth increases demand for access to the state’s legal system but decreases supply. Again, this is because wealth and economic development in a wealthy country are liable to motivate the state to increase fees, on the grounds that the wealthy can and will pay them. However, those same fee increases are usually substantial enough to dissuade the poor from using the state’s system and thus there is an overall decrease in access to justice.

This finding places us before a stark reality. In a wealthy country like the United States, we can use our courts and other “property rights institutions” (without forgetting that our courts are intended to protect not just property but also civil—human—rights) as a means of generating revenue for the state, or we can use them as a means to disseminate access to justice on as wide a basis as possible. They cannot be used for both because, based upon Simpson’s research, in wealthy countries one of these objectives is mutually exclusive of the other. If we choose to use our courts and other state legal institutions as a source of revenue, then at the same time, we are choosing—deliberately and with full knowledge—to limit if not entirely block access to justice for a certain portion of the American population, and the more we rely upon those institutions for revenue (that is, the greater the fees we charge), the larger will grow that portion of the American population with limited to no access to justice.

This stark reality leaves us with an equally stark, three-option choice:

As I’ve already noted, Simpson’s research is new and, as yet, exists only in the form of an evolving working paper. Nevertheless, her work is highly intriguing, it has multiple implications, and it already merits attention.

It’s a beginning of a response to Hadfield’s call for more research. The question is: now that we have it, what will we do with it?

Law and Economics Programs at US Law Schools: Conceived in Opposition to Civil Rights and Dedicated to the Proposition that Majorities Should Not Rule: Part 1, Part 2, Part 3 and Part 4

2 thoughts on “You Asked For Research? You Got It! Now What Are You Going to Do With It?”