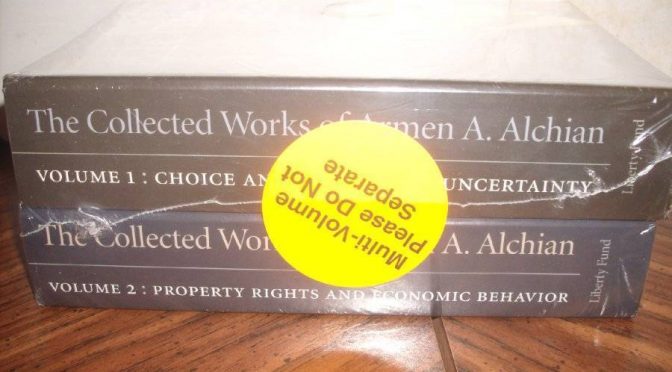 The last post began the story of law and economics programs in US law schools, described the importance of John Olin and the Olin Foundation in their development and introduced Henry Manne as playing an indispensable role. (Read more about Law and Economics programs here).

As John J. Miller explains in his book A Gift of Freedom: How the John M. Olin Foundation Changed America,[1] during Frank O’Connell’s visit with Manne at the University of Rochester in the early 1970s, Manne gave O’Connell a prospectus for a center dedicated to law and economics. After examining the prospectus, O’Connell became enthusiastic about the “law and economics movement”[2] and recommended to Olin that the Foundation invest in it. At first Olin was skeptical, asking “What the hell is a lawyer doing teaching economics?”[3] Clearly, however, he overcame his skepticism because, as noted above, the Foundation ended up investing upwards of $68 million in law and economics programs at a number of US law schools before the Foundation closed its doors in 2005. Miller explains that “of all the foundation’s activities, this was perhaps its most significant,”[4] and Olin remain convinced of its importance until his death in 1982.[5]

Manne’s role did not end with the delivery of that prospectus to O’Connell. To the contrary, his role was pivotal for decades to come. While the Olin Foundation contributed the funds, Manne contributed the organizational know-how and the enthusiasm. Miller explains that “although his scholarship had great impact, Manne made his most lasting contribution as an organizer.”[6] With Olin’s funding, Manne was able to realize his dream of exposing as many as possible to “law and economics thinking.”[7] He did this through the development of law and economics programs at several law schools and through providing the blueprint for the development of programs at many other law schools, through the creation of fellowships for graduate students studying economics, and through programs to educate judges and law professors.[8] Throughout it all he enjoyed the financial support of the Olin Foundation. Eventually Manne would write to Olin:

Your support was an entrepreneurial act comparable to funding a large and risky new enterprise…Without your financial and moral support…my own aspirations and ambitions would have come to nothing.[9]

Indeed, Miller explains that by the late 1980s, Manne had come to be recognized not only as a leading scholar in the field of law and economics, but also as one of the movement’s “greatest organizers.”[10] 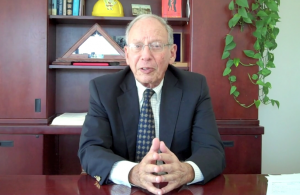 Henry Manne graduated from Vanderbilt University in 1950 with a BA in economics and then went on to study law, first at the University of Chicago, receiving a JD in 1952 and then at Yale, receiving an LLM in 1953. At that time, Aaron Director, an economist, was head of the law school. Manne later described Director as a “steel-minded devotee of free markets”[11] and Manne said that he was “certainly influenced”[12] by him. At Yale, because he was a law and not an economics student, Manne was not allowed to take the economics classes that he wanted to. Later he said that he “hated ”[13] Yale, and he returned to Chicago as soon as he could, obtaining a position as a research associate for an “Antitrust Study” funded by the Ford Foundation. However, just one week after he assumed the role the Air Force called him to active duty, requiring him to report within 24 hours.[14] After leaving the military, Manne taught law at Saint Louis University and the University of Wisconsin.[15]

When Manne was at Yale and forbidden from taking the economics classes he wanted to take, he read independently the works of Ludwig von Mises and Friedrich Hayek.[16] Later, in 1957, he had the opportunity to hear Armen Alchian lecture on what was later published as “Some Economics of Property Rights.” Manne later described this encounter with Alchian as the “seminal intellectual event”[17] of his life: “everything I had done intellectually for 13 years came together, with this one idea of Alchian’s about the real nature of property rights and the Misesian notion of people making choices, with every choice being a tradeoff.”[18]

In sum, Manne’s exposure to Aaron Director at the University of Chicago, Manne’s independent reading of von Mises and Hayek while at Yale, and Manne’s encounter with Alchian primed him for another pivotal moment in his career. This occurred in 1962, the year when he accepted an appointment at George Washington University and the year when James Buchanan and Gordon Tullock’s book The Calculus of Consent[19] was published. 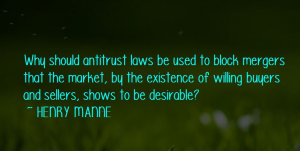 During the year before his death, Manne spoke publicly on at least two occasions of the importance of this book for him. Speaking on one of these occasions, Manne said:

I got the book and I was blown away. I said this really rounds out what became “law and economics.” This is very important. And I said the lawyers certainly ought to know about this. I had to twist arms as only a very junior professor can in the law review at [George Washington University] to get them to allow me to review that book. They didn’t think anyone else would be interested. And that review…is literally the only book review of “Calculus of Consent” to appear in any law review in the United States. That tells you something about the level of intellectual curiosity and scholarship in law circa 1962. When [the review] came out, I sent a copy to both Buchanan and Tullock…Within a matter of days I had a telephone call from [Tullock] inviting me to Charlottesville to give a paper and the rest was more of my personal history of a long and very close association mainly with Gordon but also very much with Jim. That came back some years later. I had started the law and economics center first at Miami and then at Emory. I got a call from [Buchanan] …They had moved the Public Choice Center down to George Mason [University] at that point…and they wanted to know if I would be interested in being dean of the law school.[20]

In sum, for Manne, The Calculus of Consent served as the fuel he was looking for: to spread the word of Alchian on property rights and of von Mises on public choice to lawyers.  Manne used this fuel to start a pilot law and economics program at the University of Rochester, before moving on to the University of Miami and then to Emory, creating law and economics centers at both with funding from the Olin Foundation. Further, Manne’s review of The Calculus of Consent lead to his long friendships with the book’s authors, and, ultimately, to Manne’s 1986 appointment to head the law school at George Mason University, alongside Buchanan’s and Tullock’s Center for Study of Public Choice. Manne remained at George Mason for the rest of his career, all the while with funding from the Olin Foundation (up until the Foundation closed its doors in 2005). At the time of his death in early 2015, Manne was hailed as “the true founder of law and economics.”

The next post will examine The Calculus of Consent, the book that was so pivotal for Manne, in greater detail.

Law and Economics Programs at US Law Schools: Conceived in Opposition to Civil Rights and Dedicated to the Proposition that Majorities Should Not Rule: Part 1, Part 3 and Part 4

My connection with Public Choice Theory and therefore with Jim [Buchanan] began in 1962 when I read, to my utter amazement, a book called “The Calculus of Consent.” I was totally enamored of it and I said this is something that the lawyers and the legal scholars have been looking for and have needed for a long time. And so I wrote a review of the book, which I’m guessing – it wasn’t easy in those days – five or six different major journals turned down. I was able to lean on my own local review at George Washington University to publish the review, and I can tell you, it is the only review ever written of that book in a law review…[Buchanan and Tullock] introduced great analytical power of economics to the field of political science, of political activity. I was very active in doing the same thing with law. Thereby, both those fields that had been extremely moribund intellectually came alive. They are very different fields today, each worthy of being in the university, than they were back in the days before Public Choice Theory.